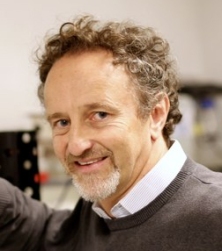 Originally from Monaco, Dr Gilles Pagès obtained his PhD in Molecular Biology from Nice University FRANCE in 1990. He then joined for his post doc the group of Dr Jacques Pouysségur to clone the cDNA and genes for MAP Kinases. He obtained a permanent position as an assistant Professor of the University of Nice Sophia Antipolis in 1991. During ten years he developed a strong research in cell signaling and demonstrated the pivotal role of MAP Kinases for cell proliferation and tumor development. After several years dedicated to fundamental research, he decided to apply his knowledge to translational research. Therefore he studied the importance of the MAP Kinase/ERK pathway in the regulation of expression of Vascular Endothelial Factor (VEGF). He established a link between active mutations of the RAS/RAF/MEK/ERK pathway and tumor vascularization by showing the ERK up-regulated VEGF expression through the stimulation of the transcription of its gene and the stabilization of its mRNA. Since 2008, Gilles Pagès has more specifically focused on renal cell carcinoma (RCC), a paradigm of exacerbated vascularization and the use of anti-angiogenic drugs. During the last few years he deciphered several mechanisms of resistance to anti-angiogenic therapies including lysosome sequestration, genetic adaptation of tumor cells, production of pro-angiogenic cytokines by tumor cells that are redundant of VEGF and finally the development of a lymphatic network under the pressure of selection exerted by AAG. Gilles Pagès has published 137 articles in peer reviewed journal. His H factor is 50. He has developed several collaboration all around the world especially in the USA, Germany, Japan, Israel, Saudi Arabia….

My research activity is dedicated to both RCC and pediatric medulloblastoma (strong financial support from the Fondation Flavien http://www.fondationflavien.com/) . Both tumors share several mechanism of adaptation to treatment. We are in the process to develop several new therapeutic tools for both tumor types including bispecific antibodies and pharmacological inhibitor. One part of these activities are developed at the Centre Scientifique de Monaco where I am a consultant.

Currently I am the President of the French Society of Angiogenesis (SFA)(http://www.angiogenese.fr/). The SFA was founded in 2007, as a continuation of the French Angiogenesis Network created on 16 May 1996 by several French researchers working on this subject aiming at favoring exchanges between their laboratories. The goals of the Society are to promote research, education and information on normal and pathological angiogenesis and to favor exchanges between fundamental, clinical, and industrial research. My vision for EVBO is to share with the SFA our efforts to promote our activities all around the Europe. I am convinced that EVBO and SFA have a great common future.